Earth Caravan and Hiroshima Survivor to Pray for Peace with Pope

The pope blew upon the "flame of peace" when Earthcaravan member asked him to do so as a symbolic gesture of wishing that no such embers from a conflict will ever be ignited again. 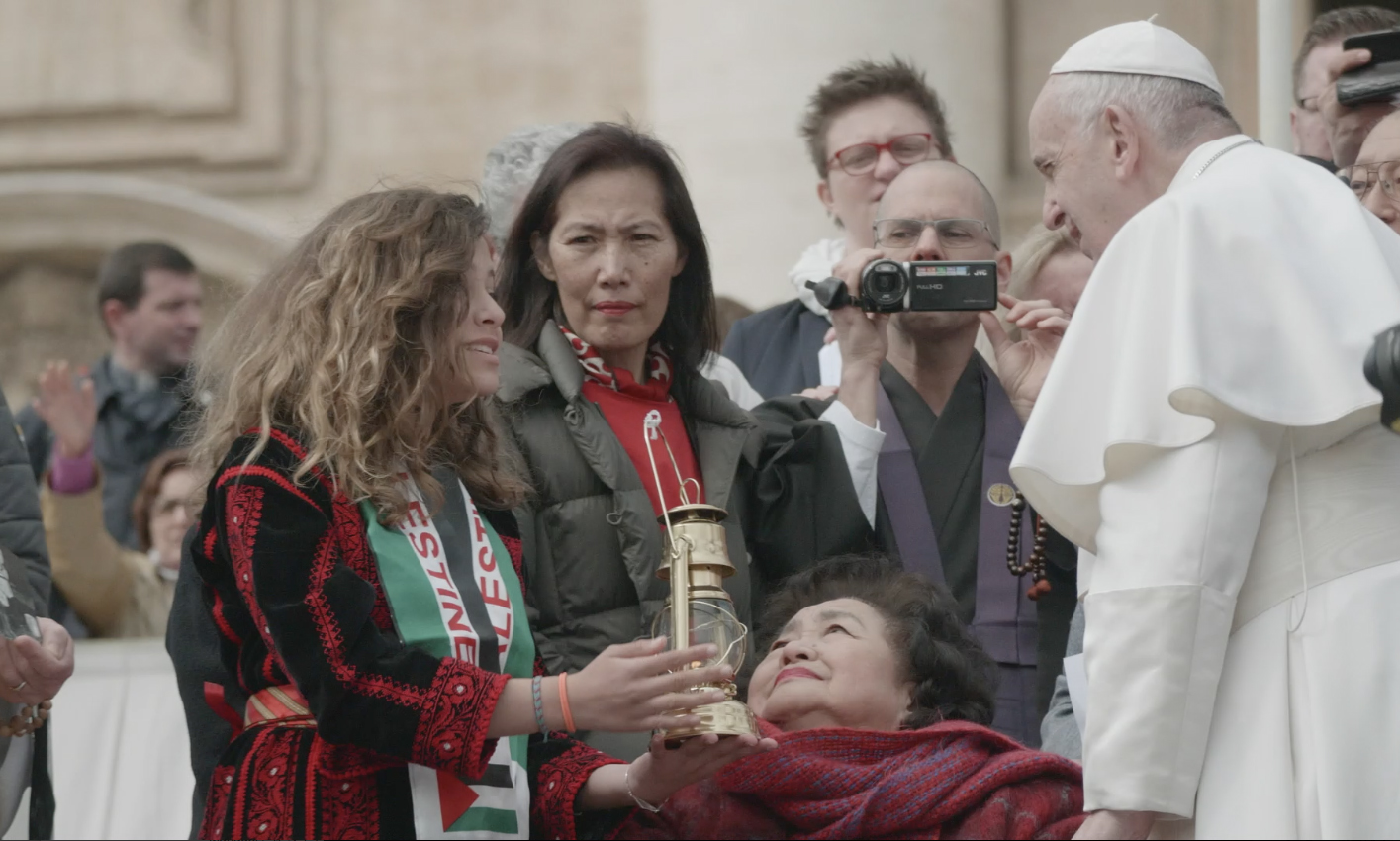 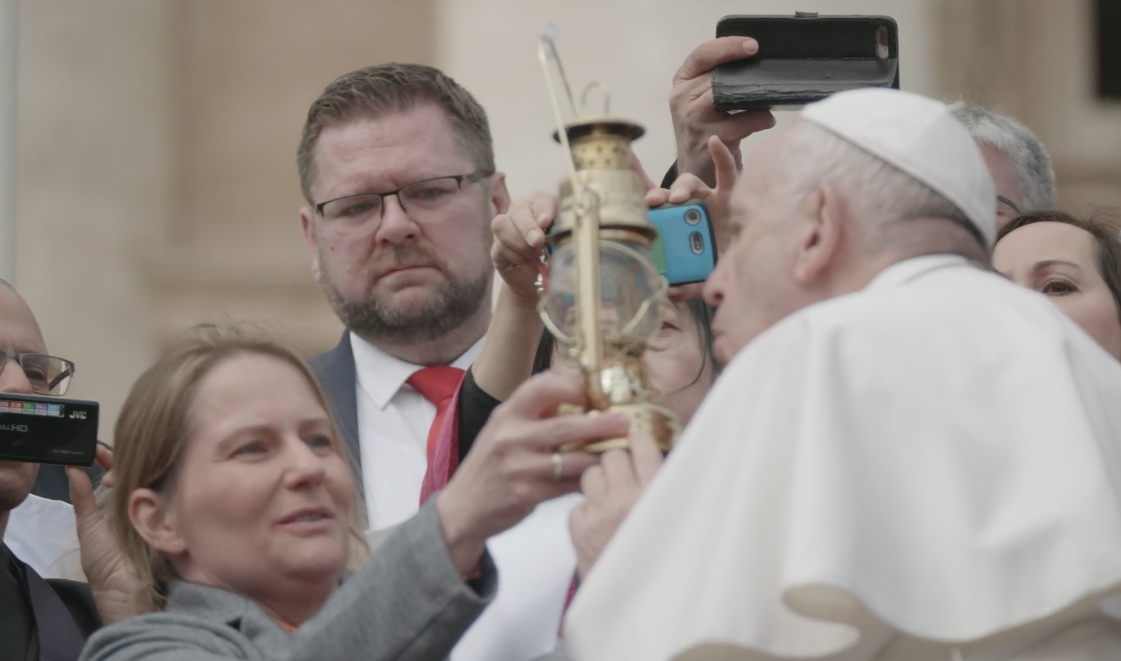 Earth Caravan, led by Buddhist priest Ryokyu Endo, along with Mrs. Setsuko Thurlow, a Hiroshima atomic bomb survivor who received the Nobel Peace Prize on behalf of ICAN in 2017, will make a pilgrimage to the Vatican carrying the Hiroshima Flame to be presented to His Holiness Pope Francis. The flame was taken from the ashes of the atomic bomb and has been burning continuously as a symbol for peace since August 6, 1945.

Mrs. Thurlow was 13 years old when the atomic bomb exploded, and she lost her entire family. Joining Mrs. Thurlow will be a delegation of four 13-year-old girls from different countries and cultural backgrounds, including Ms. Yusa Okada, a third-generation atomic bomb survivor from Nagasaki. Also accompanying the delegation will be second-generation Nagasaki bomb survivor Ms. Chiyumi Shinkai. Lawrence Lefcort and Alex Pereklita of Tao Sangha will be representing the Earth Caravan delegation from Canada.

The Hiroshima Flame has been burning constantly since the atomic bomb was dropped on Hiroshima in August of 1945. It is to be extinguished only when the threat of nuclear war and nuclear weapons is gone. By symbolically blowing out the flame at the Vatican, we hope to usher in the bright future of a nuclear-free world.

Since 2015, Earth Caravan has traveled from Nagasaki to Hiroshima, from Auschwitz to Srebrenica, and from the First Nations of Canada to Israel and Palestine. Every year, Earth Caravan’s prayers and activities inspire thousands of people all around the globe to work for the bright future that we all share.

”If adults won't make peace - we will!”
These are the passionate voices of four, 13-year-old girls talking about their wish for peace. What they hope and work for is the realization of a world where all beings are respected. Yusa Okada from Nagasaki, Janna Ibrahim from Bethlehem, Yasmine Abouzaglo from Dallas, USA and Mirjam Schmitzhofer from Vienna represent the fervent wish of the next generation for a bright future without nuclear weapons.

Accompanied by Setsuko Thurlow, a Hibakusha, nuclear bomb survivor of Hiroshima 1945 and Clifton Truman Daniel, grandson of former president of the United States, Harry S. Truman, these five girls from different nations and religions would like to bring the Peace Flame of Hiroshima to His Holiness Pope Francis, at the Vatican and pray together with the Holy Father for Peace and Justice.

Setsuko Thurlow accepted the Nobel prize for Peace in 2017 on behalf of the International Campaign on Abolishment of Nuclear Weapons -ICAN, and spoke at the United Nations in 2017 about the need to ban nuclear weapons.

Since 2015, seventy years after World War Two, the Earth Caravan has travelled from Nagasaki to Hiroshima, from Auschwitz to Srebrenica in Bosnia-Herzegovina and to Serbia, and from the First Nations of Canada to Israel and Palestine. Every year, Earth Caravan’s prayers and activities, inspire thousands of people all around the globe to work for the bright future we share.

Peace is established only when people overcome differences of race, country, religion, and ethnicity. We believe that it is critical for Christians, Buddhists, Jews, Muslims, and Indigenous peoples to pray and work together, connect, and deepen our shared bonds to establish lasting and true friendships.

The Earth Caravan aims to create a world of loving communities that take care of each other and take responsibility for other people’s happiness.


The Peace Flame of Hiroshima
The Peace Flame is an actual flame that Tatsuo Yamamoto took from the embers of the fire following the atomic bombing of Hiroshima on the 6th of August, 1945. He carried it to his hometown, Hoshino village in Yame City, Fukuoka.

The flame has been kept alive in the village as a symbol of peace and remains lit in the town’s Peace Tower until now. The mayor of Hiroshima has given the Caravan special permission to bring the Hiroshima Peace Flame on the Caravan’s voyage from Japan, to North America, Europe and the Middle East.


The Earth Caravan in 2020
The intention of the Earth Caravan pilgrimage in 2020 is to raise awareness worldwide about the situation of children who live in unacceptable circumstances, in war zones, under occupation, or are refugees. Peace Cycling, Concerts and Festivals will take place all around the world leading the Earth Caravan from Hiroshima to Nagasaki, from Toronto and Montreal to the villages of the First Nations Natasquan and Mingan, and continuing to Vienna and Srebrenica, and then to His Holiness Pope Francis in the Vatican.

In 2020, the Earth Caravan is organizing in cooperation with the Holy Land Trust a peace festival and peace conference in Bethlehem with children and artists from around the world featuring the Peace Flame.

Satoshi Suzuki, a Japanese filmmaker and an employee of Dentsu, one of Japan’s most successful and well-known advertising companies, will make a documentary film about this peace festival and conference. The theme will be the impact that youth have on the future of our world.

She was born January 3, 1932 and was exposed to radiation approximately 1.8 kilometers from the hypocentre of the blast. Eight of her family members and 351 of her schoolmates and teachers were killed in the attack.

After World War II, she moved to Canada after studying in the United States, and is a leading figure in "the International Campaign to Abolish Nuclear Weapons - ICAN".

She gave a speech on behalf of ICAN at the award ceremony of the 2017 Nobel Peace Prize in Oslo.

ICAN won the Nobel Peace Prize for its work in drawing attention to the catastrophic humanitarian consequences of any use of nuclear weapons and for its ground-breaking efforts to achieve a treaty-based prohibition of such weapons.

It was reported that her many speeches at the United Nations have brought diplomats to tears and strengthened their personal resolve to eliminate the nuclear menace.

Her many presentations at schools, as part of the New York-based Hibakusha Stories project, have had a profound impact on the lives of thousands of students.

For her work in trying to achieve a more peaceful and just world, she has received numerous honors, including the Queen Elizabeth II Diamond Jubilee Award in 2012.

The city of Hiroshima designated her a “peace ambassador” in 2014 and the Arms Control Association (ACA), an American “think tank” in Washington, named her “arms control person of the year” for 2015.

In 2016, she received the Ahmadiyya Muslim Peace Prize.

Head priest of Wada Ji Sangha Temple, (Mahayana Jodo Buddhism) which overlooks all aspects of buddhist teachings in cities all over the world. He is the founder of Tao Sangha, Tao Shiatsu, Ki Shin Do, has written many books available in a multitude of languages, released six musical albums, invented Chatranga, a strategic peace game, and continues to teach classes, lectures and dharma talks in person and online. Being an activist for peace, he travels around the globe giving workshops, supporting communities in need. Constantly, Ryokyu Sensei is in touch with people across the world, as he looks for and develops projects that improve the outlook towards life and future. The Earth Caravan theme song "Share the Earth, Happiness and Freedom" was composed by Master Endo.

Born in Nagasaki. A student of Junshin Catholic Junior high school, where 214 of teachers and students were killed by the atomic bomb dropped on the city in 1945. Yusa is a third generation survivor, which means that her grandparents survived the bomb, but suffered cruelly from the nuclear catastrophe.

Born in the United States, she is currently living in a Palestinian village that is located about 2 hours from Bethlehem. Facing everyday life under occupation has made her commitment to peace and non-violence, a safe future, and equal rights for all naturally strong.

Yasmine was born and raised in the Modern Orthodox Jewish community in Dallas, Texas, USA. Her father is Israeli and her mother is from Costa Rica. Like her older brother Amitai, who is a peace activist, she rejects injustice and war. Her strong opinion is, that everybody should be respected and free in our world.

Born in Vienna, Austria, she has travelled with the Earth Caravan Pilgrimage to Bethlehem and Srebrenica, performing with her flute at various concerts and recording the Austrian version of the theme song Share. Her message is: “Let’s create peace, let’s just do it. I wish for all children, that they can be happy and live their dreams.”